Showing posts from November, 2019
Show All

Putteridge News  Bedfordshire Police is appealing for information and witnesses after a number of shops in the county were robbed in similar circumstances. At around 7am on Tuesday (26 November), Putteridge News in Putteridge Road, Luton was targeted by three men.

They entered the store, assaulted the shop assistant and stole cash and cigarettes. The offenders were wearing face coverings and gloves.

Later that day, at around 7pm, three men carrying what were believed to be knives entered the Nisa store in Dunstable Road, Toddington. Staff were forced to hand over money from the till, which was also taken. One woman sustained an injury to her elbow when she fell to the floor during the incident.

The offenders are described as three large men with their faces covered.

One was wearing a grey hooded top, with the other two wearing black hooded tops.

One was around six foot tall, in his early 20s, well built and with a local accent.

A serial burglar has been jailed for life after committing offences in Bedfordshire and elsewhere around the country.

Patrick Connors was sentenced to three years for a burglary in Elstow in 2018. Forensic work was able to identify Connors’ blood having been left at the scene.

This is one of a number of recent significant sentences for burglary in Bedfordshire, with three others jailed this week for at least 18 months.

One of them was disturbed by the victims during a burglary, while the other two falsely claimed that they had a bomb in their possession when police turned up at the premises they were attempting to steal from.

Detective Constable Andy Boston said: “These sentences show how serious our force is about pursuing burglars and bringing them to justice.

“We will use a wide range of investigative techniques to identify those responsible and ensure they are prosecuted and ultimately spend time behind bars.


Since its launch, the NHS 111 telephone service has provided urgent health advice to tens of thousands of people in our region. To make the service even more accessible, an online version of NHS 111 is now available across Bedfordshire, Luton and Milton Keynes.

Accessible on smart phones, laptops and other digital devices, the online service is free and easy to use. By logging on to the NHS 111 website, anyone with a medical problem can quickly get advice on what NHS service they might need and how urgently.

After establishing that your condition is not an emergency, you are asked to input your main symptom, for example “headache” or “swollen knee”. A digital search system then returns a list of health conditions that best match that symptom.

On selecting the most appropriate condition, a series of questions with multiple choice answers will appear on the screen that have been carefully designed to assess your health. Healthcare advice will then be provided based on the answers give…
Post a comment
Read more

Construction of a double garage in rear garden for use as a day room and children's playroom.
178A Putteridge Road Luton LU2 8HJ

A burglar who was identified by his tattoo after being recorded on video doorbells will spend two years in prison.

Christopher South, 30, of The Grove, Luton, was sentenced today (Friday) at Luton Crown Court after pleading guilty to burglary, attempted burglary and theft of a motor vehicle.

On 23 September, South approached a property on Fairfax Avenue, Luton, and attempted to gain access. He was unsuccessful so made another attempt on a second property in Third Avenue, where he did gain entry and stole a set of car keys, and subsequently a car, a phone, a Ralph Lauren wallet and a grey Superdry coat.

The victim of the first incident was told by a neighbour that a man had tried to get into her house. She checked footage from her Ring doorbell, where she saw a man attempting to gain entry to the property using a chisel.

Despite covering the lower part of his face, a tattoo on his right hand could be seen. The footage was submitted to police. 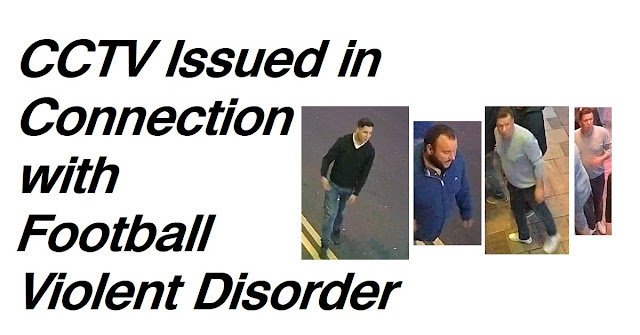 Force officers investigating disorder in Luton following a football match have issued images of three men they would like to speak to in connection with the incident.

On 19 October, at approximately 6pm, in Guildford Street, following the Luton Town versus Bristol City match, groups of opposing football fans were involved in disorder and several assaults took place.


Sergeant Liz O’Brien, who is investigating, said: “We would like to ask anyone who recognises the men to get in touch with us, as we believe they might have key information about this incident.”

Anyone who recognises the men is asked to contact Bedfordshire Police by calling 101 or by visiting the force's online reporting centre and quoting reference number 40/62333/19.

If you have news for Luton, please send it in
Post a comment
Read more
More posts
Luton local news and events for the town of Luton, Bedfordshire, UK. Editor Alan Winter.

- October 13, 2018
easyJet, and Virgin Atlantic have joined up as new airline partners to provide a new connections service  ‘Worldwide by easyJet’.